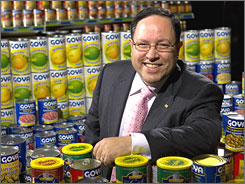 SECAUCUS, N.J. — Bob Unanue and his three brothers grew up mostly in suburban New Jersey speaking English instead of their father’s family language, Spanish, and eating their Irish-American mom’s meat and potatoes.

But today, Unanue is as fluent in Spanish as he is in the world of yucca, cactus and chicharrones.

As CEO of Goya Foods since 2004, the 53-year-old leads the third generation that’s running the privately held company. Talkative and alternately serious and dry-witted, Unanue is most passionate when talking about Goya’s mission and its customers.

“We are the nostalgia,” says Unanue (pronounced oo-NA-new-way), the eldest of six children. “We welcome the immigrants into the country with food.”