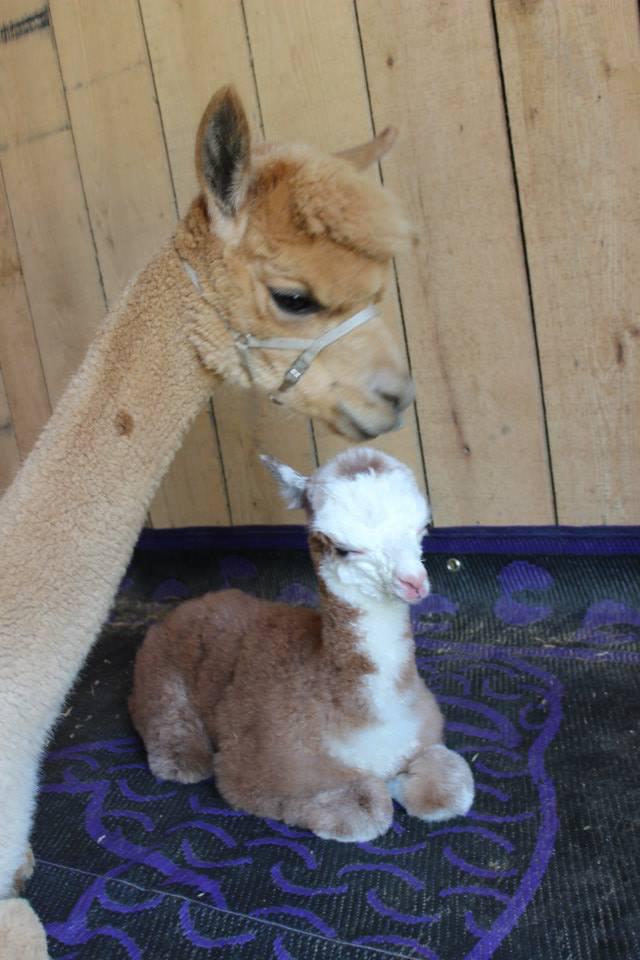 One of the things I love about traveling is finding places that are not touristy. Yesterday’s find was a complete non-touristy gem! We toured the Fox Wire Alpaca Farm in Toano, Virginia, which is approximately 15 miles from Williamsburg. The farm is owned by John Ballentine and Laura Hineman.

We drove down a mile long winding road and as soon as we arrived a wagon pulled by a tractor was waiting for us and our group. We got down, said our hellos and proceeded to climb into the wagon. When I looked back to see that my son Aiden was behind me, I noticed he was still back at our truck about to grab his trusty glove and baseball. When I asked him what the heck he was doing, he proceeded to tell me that he was “bored”. Owner John, who was our tour guide, easily convinced him to “help” him with the tour and turned a sulky teen into a chatty kid who gladly participated and felt important the rest of the day.

The farm is located on a beautiful 200+ acre property which is actually a peninsula. That was the first thing the kids learned about. Instead of looking at a peninsula on a map, they actually visited one and were shown the water surrounding the area.

The entrepreneur in me was really digging the news that owning Alpacas is great for tax planning. Apparently, anything that touches them is tax deductible. The owner even offers Alpaca Investment Portfolios (AIPs)

One of the neat things we learned was how they grow all of their own feed for all of the animals using hydroponics. They are very proud of this fact as well as the fact that they work very hard to minimize their environmental footprint. They do this by composting all manure and reusing it in their farm.

Raising alpacas is an interesting venture. They are used to very cold weather, so they need to be kept cool during the Virginia summers. They are also not a walk-in-the-park to breed. The male has an orgle or special song that he sings and if the female doesn’t particularly enjoy his mating call, she will spit at him. I’m thinking us human females should emulate this behavior.

Another complication is the fact that alpacas are “induced ovulators” which means the act of intercourse or presence of alpaca semen can make them ovulate. They don’t have a regular ovulation cycle that can be counted on. Lastly, gestation is a full year, so those alpaca babies are cooked for a long time.

The kids ranging in ages from 5 to 17 all learned about the reproductive cycle of Alpacas and about raising them all petting them and interacting with them.

They also learned about raising chickens to lay eggs and what makes organic, free range chicken eggs better. Heck, I had no idea that you can tell the difference by the yolks and egg whites. The egg whites should not be runny like the ones from store bought eggs. I must confess that when I went home I decided to make an omelette strictly for the purpose of checking out the eggs. They were runny; no bueno.

After we visited with the alpacas and chicks, we had fun with some goats and fed the horses. This nature and animal lover was in absolute heaven. Even the teenybopper was having a great time. Who doesn’t love petting horses?

There were also four adorable donkeys that we got to hang out with. One of them was such a sweet thing that she kept wanting to crawl into everyone’s laps. John was trying to train her to be around people without trying to crawl into their laps.

The last thing we saw on our tour were two very alert and interested guard llamas. Yes, you read that correctly. I feel as ridiculous even writing the words “guard llamas”.

The neighboring land has visiting hunters who have hunting dogs that can do some gnarly damage. That coupled with many natural predators has led the owners to buy two trained llamas who guard the farm animals. One of them has two killed coyotes to his credit, so these are some seriously badass llamas. So the kiddos and parents learned a lot about running a farm, geography, conservation, and a wealth of things that we don’t encounter in our suburban and urban daily lives.

I couldn’t recommend this place enough, so if you visit Williamsburg, Virginia, definitely check them out. You will be very happy you toured the farm.